skip to main | skip to sidebar

The Beast is Back!

It's been an age (time moves at a different rate in Annwn), but I'm back after a lo-o-o-o-o-ong hiatus and have a new Graphic Novel on the boil, Volume 2 of my Unbelievable Trilogy, entitled  `The Lord Of Winter'.

I'll be posting some concept art  / sketches and further information soon, including some spoilers and a chance for some lucky (unlucky) fans of the book to have a cameo in the book!

I will be using this blog as a 'work in progress' for the graphic novel series and for any other projects which I may be involved in.

Until then, here's some concept art for a grown up Myrddin Wyllt from the opening chapter of The Lord of Winter. 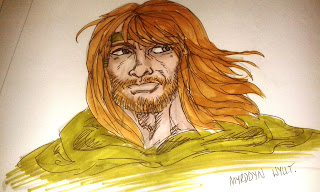 Don't Turn Around,
Don't Make A Sound,
And Never, Ever,
RUN!

Hi, been a while.

2012 is turning out to be a veeeeeeeeeeeeery busy year for me so far and I am conscious that I haven't updated this for a long time.

With the Cardiff International Comic & Animation Expo just around the corner (next weekend in fact) I shall be manning the Markosia tables with my earstwhile Orang Utan cohort Peter Rogers (The Interactives), the inimitable man-monkey himself, Chris Lynch (The Dark) and Rich Macauliffe and Mark Chilly who'll have their superbly sick and scary 'Damaged Goods' on display.

Harry Markos and a veritable battalion of Markosia creators will be descending on the London Super Comic Show the very same weekend, so Markosia's Welsh contingent will be selling our wares, meeting fans and saying hello to any prospective writers and artists no doubt.

We'll all be attending various panels during the weekend, opening at 11am I'll be in the company of Rich Mcauliffe & Mark Chilly and Bearded Skull Comics' Jamie Lambert and Dave Clifford (Dexters Half Dozen) baring our bottomless black Welsh hearts and monstrous minds exploring the darker side of comics. This is being hosted by SidekickCast' s Gavin And Dan and should be a lot of fun.

At 3pm on Sunday, I'll be joining Peter and Chris for 'Unbelievably Dark and Interactive' - discussing each of our books and the latest offerings from Markoia. Once again, this is hosted by Gavin and Dan of The SidekickCast.

Throughout I'll be sketching, both at the Markosia table and for Stacy Whittle's fairy tale anthology launch of Into The Woods for which I provided artwork for Lee Robson's tale, The Lang Pack back at the end of last year. I'll also have the original art to this and some pages from Unbelievable with me over the weekend.

Also, and more importantly (especially as it's going be an 'official' Cardiff convention launch of `Unbelievable: The Man Who Ate Daffodils') I'll be selling signed copies (with sketches) and as I'm feeling 'unbelievably' generous (see what I did there) - for the first 20 copies purchased, I'm throwing in an exclusive limited edition signed and numbered A5 print of the image below. (An image so exclusive it needs a spoiler warning!) 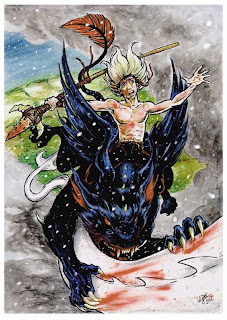 Till next time, when I'll report back from the con and update you with some more exclusive art from a new project. 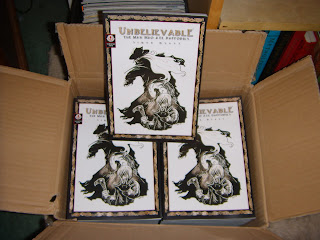 Now this is what I call a pleasant surprise!
Posted by Simon Wyatt at 14:09 No comments:

My Artwork on the World Wide Web